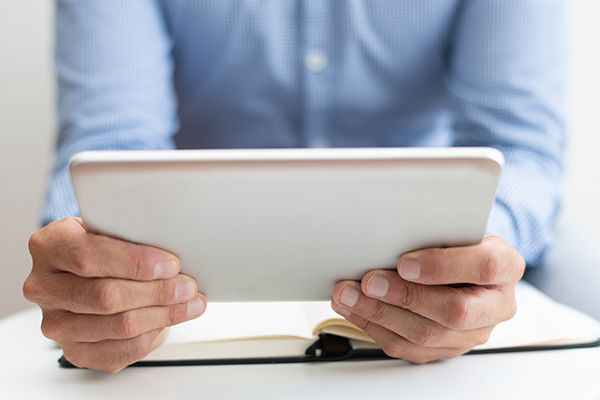 As technology continues to advance, one of the primary limiting factors is how we interact with it. Initially, computers were controlled by a limited series of printed cards, then a narrow set of input commands. The mouse made the experience more tactile, which led to touchscreens. Currently, tech is being developed that will allow virtual swiping in the air above a device, creating a virtual interface that becomes even more intuitive. Let’s look at current touchscreen technology that dominates the market and explore what might come next.

Capacitive touchscreens primarily use an indium tin oxide (ITO) coating that is patterned onto a thin glass surface, forming a conductive layer. When a user touches it, the electrical pattern is interrupted and interpreted as a command by the underlying computer. This approach currently dominates the smartphone and tablet market. Capacitive screens are the default choice when multiple touchpoints are required in a relatively small screen size. Replacements are being sought because our source of indium is limited and rising in cost.

Resistive touchscreens are comprised of a top layer of polythene and a bottom layer of glass, separated by insulating dots. The primary advantage is that these are much cheaper to manufacture than capacitive screens, and this cost differential is amplified as the screen size grows larger. Because commands are based on pressure, it can entertain both finger and non-finger contact, such as a gloved hand or stylus. These are primarily used in GPS systems, digital cameras and large touchscreen displays. There are two primary disadvantages here: the top plastic layer is susceptible to being scratched, and touch is generally limited to a single point of contact, whereas capacitive touchscreens can enable up to ten points of contact.

Infrared sensors use LEDs to detect a change of light when touched. They’re useful in outdoor environments due to their high level of resistance to contaminants, easy to maintain and boast a long lifespan. They’re often used in ATMs, outdoor kiosks and factory touchscreen applications. There’s no limit on input materials, so even a hand clothed in a heavy work glove can manipulate the controls. It doesn’t require patterning on the glass like capacitive touchscreens do, so infrared screens are inherently stronger. However, its performance can be negatively impacted by bright sunlight and it isn’t generally suitable for smaller screens.

SAW screens have some of the best image clarity, resolution and light transmission of any touchscreen tech. It has a long lifespan and is commonly used in high-traffic indoor environments like public information kiosks and computer-based training scenarios. It isn’t well-suited for outdoor use: surface scratches and contaminants like water, dirt or insects can substantially decrease performance.

Where Tech is Headed

Three priorities dominate the current evolution of touchscreen technology. The first is a touchless approach that relies on optical sensors to capture motions. Humans naturally gesture to manipulate their environment, and as optics enable us to manage smartphone, PC and automotive controls by using wrist and finger movements in the air, our interaction with technology becomes more seamless. This promises significant leaps forward in augmented reality and virtual reality (AR/VR) environments, where decreasing the need to interact with physical objects substantially increases the number of applications we can employ.

The second area of development is large screens that can accommodate multiple users simultaneously in both indoor and outdoor environments. Moving beyond even a ten-point display system can noticeably increase the possibilities of any collaborative environment, from educational and training methods to virtual, remote manipulation of equipment in space by a team of users. Developers are grappling with several challenges, such as increased size (without sacrificing capability or increasing cost beyond affordability), the flexibility to be used in both indoor and outdoor environments without experiencing decreased performance and entertaining dozens or even hundreds of touchpoints without command confusion.

Finally, scientists are experimenting with using ultrasound to generate a virtual surface of acoustic radiation above a screen. This offers numerous benefits, one of which is increased hygiene by lowering physical touch requirements. In a post-COVID world, the advantage this provides cannot be overstated. This tech would also adapt for some of the limitations of optical technology, such as areas where strong sunlight is present or where steam or other environmental contaminants could diminish an optical sensor’s sensitivity.

The Present Versus the Future

Each of the four primary touchscreen technologies has various advantages and disadvantages. The current goals of innovation and evolution include marrying these benefits while decreasing cost and improving functionality in all environments. Multiple users will soon be able to interact with large screens, and AR/VR technology will continue to increase in functionality.