Home
Thought Leadership
A Look at E-Waste: What Happens to Unused Electronics 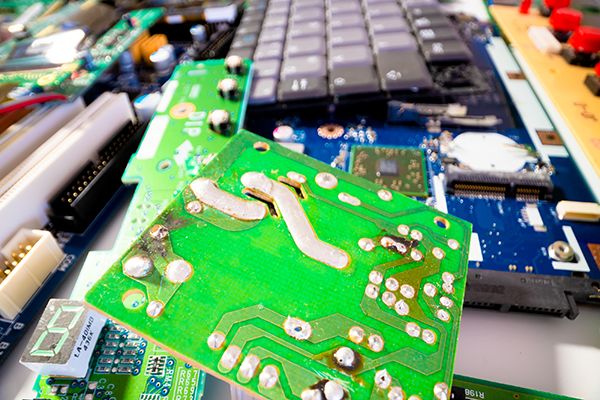 A Look at E-Waste: What Happens to Unused Electronics

Electronics are incredibly common in the United States, with more than 97 percent of households having at least one computer, and nine in ten households possessing at least one smartphone. Although the U.S. is undoubtedly a leader in this area, it’s a reality reflected elsewhere across the world. Experts estimate that nearly 500 million unused cell phones have accumulated in private homes, and a cell phone is sold to approximately 25 percent of the global population each year. When you consider other equipment such as monitors, printers, scanners and speakers, the sheer amount of materials that electronic devices represent is staggering.

Although various recycling options exist, and laws in most states mandate that electronics be processed appropriately, this doesn’t happen most of the time. There are other alternatives, such as refurbishment and reuse, which are employed to varying degrees of success. Electronics are often exported to developing countries, presenting various pros and cons. Let’s take a more in-depth look into what happens when electronic equipment reaches end of life, what should happen, and what we can do about it.

How Much E-Waste Is Created?

Discarded electronics are sources of substantial amounts of common raw materials, such as steel, plastic and glass. The EPA estimates that recycling one million laptops would save the energy equivalent of the electricity needed to run 3,657 U.S. households for a year. Electronic components are also substantial sources of precious metals: recycling one million cell phones would yield 33 pounds of palladium, 75 pounds of gold, 772 pounds of silver and 35,274 pounds of copper. At current market rates, that equals a value of approximately $2.75 million.

Ideally, electronics would be recycled, and much of this material would be recovered. Unfortunately, that usually isn’t what happens. According to the United Nations, nearly 42 tons of e-waste is created every year, and only 12.5 percent of it is recycled. Materials such as aluminum, copper, fossil fuels, gold, iron, lead, silver, tin and titanium leach into the earth, creating a substantial pollution problem.

The waste doesn’t stop there. When electronics aren’t recycled, virgin materials must be harvested and processed to manufacture their replacements. The Electronics TakeBack Coalition estimates that it takes 1.5 tons of water, 530 pounds of fossil fuels and 40 pounds of chemicals to create a single computer and monitor. More than 80 percent of the energy invested in a computer’s lifecycle is consumed during production, not operation.

What Typically Happens to E-Waste?

Although it’s easier for companies and large organizations to create programs that govern the disposal of outdated electronics, the vast majority of computers and cell phones are owned by individual consumers. There is less accountability and incentive for electronics to be recycled or appropriately disposed of at that level, so the vast majority of e-waste ends up being discarded in landfills.

Some consumers donate their used equipment to charities and other organizations that ship outdated components overseas, thinking that it can be reused in developing nations. While this is certainly true part of the time, the end result is that the e-waste is exported to countries that are often not equipped to recycle or dispose of it appropriately, driving pollution up in the long-term.

The news isn’t all bad, however. The United States recycles approximately 27 percent of the electronic waste it generates; while there’s still a long way to go, this is more than double the global average. The larger the item, the more likely it is to be recycled in the U.S., with a 40 percent recycle rate for computers (compared to 11 percent for mobile devices).

When electronics are recycled, they go through a relatively standardized process. First, certified organizations collect and transport discarded e-waste to a recycling plant. Maximizing this step is where individual consumers can have the most significant impact. Depending on the company, equipment can be evaluated for refurbishment, reuse, and resale. Whatever cannot be redeemed moves into the recycling stream.

E-waste is typically shredded first, which facilitates easy separation of components. A powerful magnet retrieves all ferrous material from the conveyor belt, consolidating it for sale as scrap steel. Next, various mechanical processes recover other metals, such as aluminum and copper. Circuit boards are collected, leaving glass and plastic behind as the last significant components. Water separation technology separates these final two materials, which are consolidated for further recycling and reuse.

Four major recycling associations coordinate most of the e-waste reuse efforts in the Western world. The Institute of Recycling Industries (ISRI) is by far the largest, with 1600 member companies across the globe. This is a general recycling association, but 350 of the companies are dedicated electronic waste recyclers. When it comes to organizations that focus exclusively on electronic waste, the Coalition for American Electronics Recycling (CAER) dominates the U.S., the European Electronics Recyclers Association (EERA) is the leading e-waste recycling association in Europe, and the Electronic Products Recycling Association (EPRA) drives efforts in Canada. Together, these professional organizations coordinate efforts and attempt to raise the bar on international reuse and recycling rates.

Half of all states in the U.S. have laws requiring mandatory e-waste recycling programs, and these cover approximately 65 percent of the American populace. In four states, all forms of e-waste are banned outright from landfills.

Much of the action for responsibly handling e-waste recycling has been taken on by electronics manufacturers and retailers. Quite a few of them have programs where individuals can return computers, cell phones, TVs, printers, scanners and consumable components (such as printer ink cartridges) directly. Each of these companies is a voluntary participant in the EPA’s Sustainable Materials Management (SMM) Electronics Challenge.

What Can Everyone Do?

Staying current with developing technology is a cornerstone of modern business, and choosing not to purchase electronics isn’t a realistic option. However, there are several steps individuals and companies can take to minimize the environmental impact electronic waste has.

First, consider upgrading hardware and software whenever feasible. Many devices are replaced based on budgetary priorities and policy-based factors rather than actual obsolescence. Creating programs that maximize tech lifespan while facilitating rapid as-needed replacement is certainly possible, but it needs to be an explicitly identified priority.

Next, encourage others to create and participate in recycling programs. This can be done at the individual and company level by advertising the importance of handling e-waste responsibly. Making various resources available, such as a list of local electronics recyclers, is crucial in facilitating individual recycling efforts. Encouraging state legislators to make and enforce stronger e-waste recycling laws is another excellent step in the right direction.

Unnecessary electronic waste creates a burden on the front end, by requiring more resources to mine and develop virgin materials, and on the back end, where unrecycled waste directly contributes to increased pollution in landfills. However, there is hope. The rising costs of rare earth and precious metals have provided a financial incentive for manufacturers to recover them. Growing awareness of the problem has contributed to increased recycle rates, and technological devices have become more environmentally friendly in recent years. We’re on the right track, but it will take effort from everyone to achieve sustainability in electronics manufacturing and recycling.