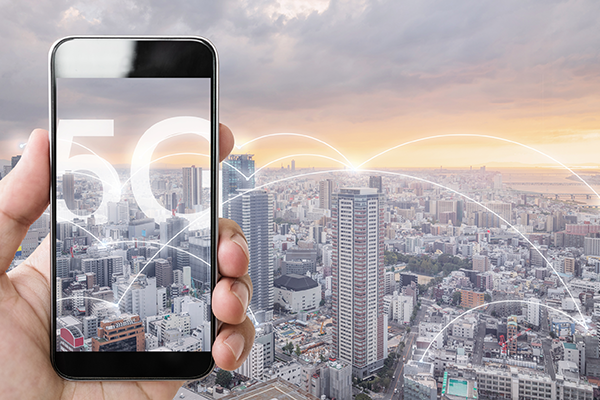 Approximately every ten years, a new cellular standard is introduced that represents a substantial leap forward in technological capabilities. The latest standard, 5G, was launched in 2019 and is rapidly becoming mainstream in 2020.

The advantages offered by 5G primarily center on drastically increased speeds. While 4G offers a max download speed of 100Mbps, 5G operates at orders of magnitude higher with a top download rate of 10Gbps. This is primarily due to leveraging millimeter-wave (mmWave) frequencies in the 20 to 60 GHz range, which forms the backbone of 5G. One of the reasons this frequency was selected was that it was relatively unused, permitting a significant increase in bandwidth availability. The short wavelength allows faster data transfer, one of the primary goals of 5G technology.

In general, lower frequency bands (such as the sub-6GHz range used by 4G) can cover greater distances with slower data transfer speeds. Higher-frequency bands, on the other hand, can rapidly transmit substantial amounts of data, but the trade-off is a limited transmission range.

Because mmWave is so high-frequency, it has difficulty penetrating windows, walls and traveling long distances. This will make it primarily an urban operating system since the signal cannot be relied upon beyond a few hundred feet of a node. In other areas, comprising the majority of the United States, sub-6 GHz wavelengths will be employed. Recent innovations allow these frequencies to operate with download speeds up to 400Mbps, which is significantly slower than mmWave frequencies but still higher than 4G standards. Devices will default to mmWave where it’s available, downgrade to sub-6 GHz 5g signals when they aren’t and resort to a sub-6 GHz 4G signal when neither 5G possibilities can be found.

Unlike previous generations, which were replaced by subsequent innovations, 4G and 5G will coexist together for several reasons. In addition to the range limitations mentioned above, there are still relatively few 5G-capable phones on the market today. In 2019, consumers could choose between only five 5G-capable cell phones. That number will substantially increase in 2020 with the projected introduction of more than a dozen 5G phones. Still, even the combined number falls far short of the scores of 4G models available in American markets today.

Carriers have embraced the technology at various rates. Verizon was first on the scene, launching a 5G network in April 2019 that expanded to 31 cities by the end of that year. 5G speeds vary widely, even in cities that were the target of initial expansion efforts. However, at an average download speed of 1Gbps, it’s still noticeably faster than what 4G offers at peak capability. While T-Mobile and Sprint focused on merging, they collaborated to create a sub-6 GHz network that covered 1 million square miles in the U.S., reaching nearly 60 percent of American consumers.

Of the major providers, AT&T lagged noticeably, with initial coverage limited to “parts” of five cities and centered around a “5Ge” network that wasn’t actually 5G at all, but rather an improved 4G service that was widely criticized across the tech industry. An additional handicap was AT&T’s lack of any phone models that could handle 5G speeds; even in areas with a true next-generation network, customers had to rely on a Netgear Nighthawk mobile hotspot to take advantage of the service.

What’s on the Horizon for 5G

The year 2020 offers the possibility of substantial improvements across the board. Numerous cell models have scheduled launch dates throughout the year, while all carriers have indicated that they will continue to invest heavily in expanded network capabilities throughout the United States.

Although cell phones are the primary technology leveraging 5G speeds currently, tech influencers have indicated their eagerness to take advantage of its capabilities in numerous other spheres. The potential for virtual reality and augmented reality to become more mainstream will skyrocket, with an improved user experience that minimizes nausea due to lower latency. VR headsets and AR glasses are still a niche market, but their future in a 5G world looks increasingly bright. Teachers expect this to revolutionize education by providing in-classroom AR and VR capabilities as a part of daily life. Particularly in an era of social distancing, the ability to conduct field trips at sites around the globe without leaving the living room or classroom will likely be widely embraced.

One of the primary drivers behind 5G technology is the rapid pace at which the IoT is progressing. The IoT is comprised of approximately 31 billion devices today, a number projected to increase to 75 billion by the year 2025. This expansion wouldn’t be possible without an improved cell network, and 5G has arrived just in time to allow uninterrupted development in this arena. The possibilities offered by these higher network speeds are virtually unlimited.